From Warring to Winning: Sisters in Life

My sister and I were not always sisters. In fact, we were once enemies. As much as I disliked her and she disliked me, our stories are intertwined in a way you have just got to read to believe. (Seriously, it’s like a movie or something!)

It all started my junior year of high school. Having mostly been a shy and insecure kid, I was starting to smell myself (as the old folks say) and there was a level of confidence that presented itself as a growth curve and literal curves. But in secret, my new-found attitude was fueled by my disdain for others. I was reckless in how I interacted with people and was a jealous-hearted person. I was often blurting out my opinions with no consideration for those it bothered and I often sank my teeth into matters that weren’t mine to deal with. In short, I was a bully.

I met Rae my junior year. She was a senior from a neighboring school and three days a week, we took classes together at a local technical center. She was skinny, light skin, overall attractive and very much the type of girl I had grown to dislike while trying to love myself more. So it was only natural that she and her crew of cheerleaders and popular girls would become the target of my bullying…. and I suppose, I was theirs.

As the story goes, the very first day of class I made a very rude comment about Rae’s shoes. I remember they were yellow leather pointy toe heels. I secretly envied not owning a pair myself but rather than admitting that, I made my comment. She made one back and thus our rivalry was born

We spent the next few months going back and forth. There were days we were civil and worked together for the sake of the program and other days, we were fire and ice. Throw in some cute boys who liked her more than me and you’ve got a full-blown war. It got so bad that our teacher made us do team building exercises which included telling each other something we admired about the other. (Think the gym scene in Mean Girls.) My response “I like your shoes… today.” (Petty before it existed.)

After graduation, I didn’t have to see Rae again so I let myself forget all about her. No apologies or forgiveness; just a mutual parting of ways.

My brother, being the handsome suave man he is, rarely introduced girlfriends officially. I knew them in passing and even went to school with some of them but overall, they weren’t my business so I didn’t mind into it. Similar to what I was doing on the couch the day my brother, who was already grown and moved out, stopped by our family house with a friend. (Gosh, I feel like I remember this in slow motion.)

You have got to be kidding me? You’re joking, right?

What are the odd’s that my brothers new girlfriend is my one sworn enemy?

As the years went on (this time-table could be all wrong), it became evident she was around for good. Yet, I was cruel and couldn’t learn to love her. For a long time, I refereed to her as Jezebel. Looking back now, I realized that she wasn’t Jezebel but her beauty and presence was a physical remainder of the manifestation of my own troubled soul (That’s a long story though). For the name calling I did, I’m forever apologetic.

Then it happened… Pppppprrrrreeeeeggggnnnnnaaaaaannnnnttttt! Rae became pregant with my nephew and though I began to appreicate her, I still couldn’t find love in my heart. To be honest, I don’t think there was any.

Fastforward three years, we were are all living in the same house again. Me and her, my brother and my nephew. The dynamics were rough. I idolized my brother almost like a father figure and his boys were my everything … but I couldn’t stand his girlfriend. She was the woman of our house now and I hated that. It wasn’t until my 3rd nephew was born that something began to change. The deeper I fell in love with them, the more I came to love and appreciate her. But just like high school, it was a constant back and forth. Sometimes, I loved her and asked for hair or makeup advice. Other days, I shut the door to my room just as I heard her arrive home. She was never the loud mouthed or wild tempered one though. She was gently passive while I was aggressively petty.

It’s 2017 and w no longer live together but the dynamics of our lives have changed again. We see each other in passing at family fuctions and rarely have more than a few words but by now, the tension and animosity have subsided. Both of us, going thru two different paths of life, were in a place of needing and it was evident that the disdain between us no longer had a place.

I suppose the shift happened during a church service my mother invited us too. Many women members of my family were there and my mother made a point to invite her. We were just two women, each trying to mend the pieces of our broken hearts, needing more from God then we could find alone. That service forced us to be vulnerable, not together per se but in the same space. There’s something about being naked in front of people that binds them. It’s almost as if once you’ve seen each other in that light, there’s an unspoken trust that connects them. That day opened the door for a connection that had been birthed over ten years prior. A few weeks later, it was solidified. She was the only person to respond to an invite to see me graduate from a bible class and that willingness to show me love was enough to melt my cold heart for good. 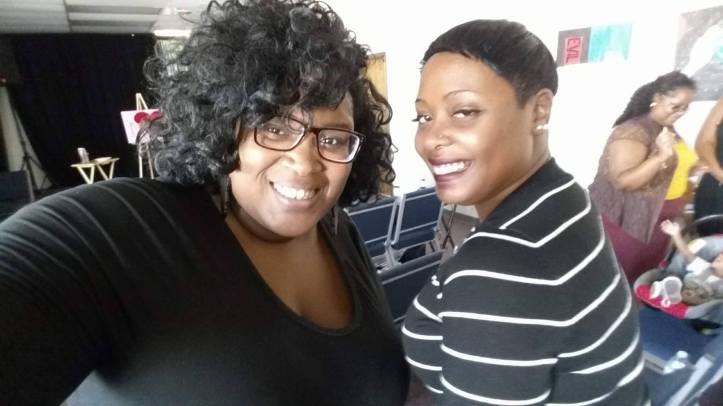 This Sunday, as we sat in church together, our pastor (Yes, “our” cause she joined my church that day at graduation) made a statement that felt so “us” and so powerful, I was compelled to tell this story.

“Those people you used to fight against, now you’ll win with.”

Rae and I couldn’t help but laugh and high-five. I must admit, it feels like the beginning of a new season; one that includes doing life and fulfilling purpose, finding love and being happy. I’m thankful and grateful for the journey from warring to winning. Rae D. is literally one of the most beautiful people I know and though there is so much more work to be done to develop this peaceful and loving relationship, I’m willing to put in the work. Because I love her.

Now, I have to end this article cause she’s texting me to join her for a conference next week. I kinda don’t wanna go, but for her I will! ♡♡♡